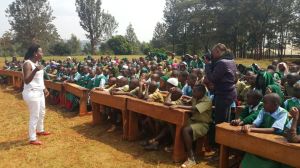 She started an initiative in Murang’a County called Zusha+ against the back drop of absence of visionary leaders amongst existing elders and disinterest of rural youth in political processes particularly young women and young disabled people. Zusha+ is geared towards encouraging young people especially young women and young disabled people to participate in political process and raise a generation of transformative and value driven leaders in the society. The initiative engages the community in transformative political leadership and democratic governance, gender issues, constitutionalism and human rights. Zusha+ which is a Swahili word means ‘raise your voice’ has brought together more than 10,000 rural youths to understand their rights and roles they can play in governance as well as engage in creating awareness to bring about a new political culture in Murang’a County and the entire country.

In 2013 national election, Zusha+ organized “Vijana na kura” program which empowered young people to vote wisely and raise their voice in civic as well as electoral participation across Murang’a County despite facing unrelenting struggles as well as intimidation by the elders. That year, youth participation in the electoral process across Murang’a County increased significantly hence gaining popularity.

Through Zusha+ local youth led discussions on democratic processes and good leadership have taken root in different villages across Murang’a involving young women and young disabled people, who were often left out of the discussions. More importantly, through social media and sms platforms, Zusha+ is able to build solidarity, mobilize youths, share best practice and encourage youths to take their rightful part in the development and political processes of the county. This has stimulated youth interests in governance and challenged the actions of government leaders over development programs.

In addition, the initiative offers weekly mentorship sessions and training to over 2000 boys and girls from the age of 10 to 18 year-olds in rural schools across Murang’a County. The training aims to inspire the rural boys and girls to build their self confidence as well as prepares them to lead later in life so as to raise a generation of visionary and value driven leaders in the society. 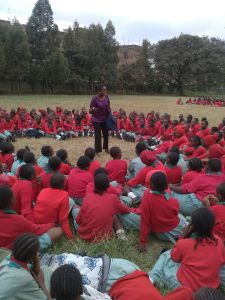 Zusha+ acts as catalyst of change in the society. It has contributed to the youth experience in Murang’a County by motivating the rural youth to actively engage in leadership with a difference.

This platform seeks to fill the knowledge and awareness gap regarding youth projects being implemented in the 47 counties in Kenya.
It also highlights projects focusing on youth being implemented in 47 counties in Kenya by the national government,county governments,donor agencies,civil society organisations (CSOs),Non Governmental Organisations (NGOs),Donor Agencies,Community Based Organisations (CBOs),private sector and individuals and their impact to the communities.
The projects lie within the social pillar,economic pillar and political pillar as enshrined in Vision 2030.
Email: youthprojectskenya@gmail.com
Facebook Page: Youth Projects Kenya
Twitter : @YouthProjects

[…] Source: ZUSHA+ INITIATIVE IS EMPOWERING THE YOUTH TO PARTICIPATE IN THE POLITICAL PROCESS IN MURANGA COUNTY […]

These are the leaders Kenya need. #Zusha+

Indeed Kimutai.If we can only have these kind of leaders across the 47 counties,Kenya as a nation will grow